Fireworks and the Fourth of July 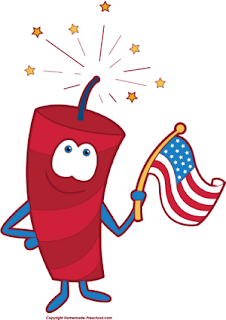 What would the Fourth of July be without fireworks? It's only fitting that we celebrate Independence Day with fireworks, because fireworks are fueled by gunpowder, which has played a key role in encouraging the development of modern democracies. Indeed, the World History Encyclopedia asserts that "Gunpowder may be the most important discovery in world history" (Watts 668).

How can this be? In the Middle Ages, just a few armored knights on horses could defeat a large number of foot soldiers. Since a few could physically overpower many, the same few could exercise political power over many.

But this began to change during the Hundred Years War, in which English archers defeated French knights in several key battles, including the spectacular rout at Agincourt in 1415. Gunpowder hadn't yet played a specific role in these battles, but the defeats illustrated that commoners, such as English longbowmen, could defeat hitherto more powerful noblemen, such as mounted French knights, in battle (Agincourt).

Soon, gunpowder weapons made it even easier to level the playing field in battle, requiring less physical strength and training than longbows yet capable of piercing thicker armor (G. Phillips 580, 584, 589). This shift in military power helped lead to a shift in political power: If a ruler relied heavily on common soldiers, then these commoners could demand a greater say in things. As Isaac Asimov explains, "In time gunpowder helped destroy the medieval order of society by giving armies a means to level castle walls, and the man on foot a chance to shoot down a horseman in armor" (25).

Americans' independent spirit stems partially from the ready availability of land in this new world. With an open frontier, colonists dissatisfied with the settlement in which they lived could often push into the frontier and start their own settlement--not an option in crowded Europe. The independent mindset held by many American colonists contributed to the eventual revolt against Great Britain, heralded by the adoption of the Declaration of Independence on July 4, 1776 (Turner 30, 78-79).

So, as we enjoy spectacular Fourth of July fireworks displays, their smoke and loud explosions can remind us all the more of the origins of our nation's independence and democracy! The libraries at Austin Community College have abundant resources for exploring the many facets of a subject such as gunpowder. One could, for example, investigate its Chinese origins, its chemistry, its use in fireworks and mining, or its role in encouraging the development of industrial fertilizer production, and with it, the ability to feed an ever growing world population (Smil xv, 46-48). Here are a few such resources:


Circulating Materials (May Check Out)


"Potassium Nitrate" in The 100 Most Important Chemical Compounds
Agincourt: Henry V and the Battle that Made England
The Alchemy of Air: A Jewish Genius, a Doomed Tycoon, and the Scientific
Discovery that Fed the World but Fueled the Rise of Hitler
The Chemistry of Fireworks
Chemistry of Pyrotechnics: Basic Principles and Theory
Enriching the Earth: Fritz Haber, Carl Bosch, and the Transformation of
World Food Production
"Saltpeter" in Fifty Minerals that Changed the Course of History
Fireworks: The Art, Science, and Technique
Fireworks: Pyrotechnic Arts and Sciences in European History
The Genius of China: 3,000 Years of Science, Discovery, & Invention
Gunpowder: Alchemy, Bombards, and Pyrotechnics: the History of the
Explosive that Changed the World
A Healthy, Wealthy, Sustainable World
A History of Greek Fire and Gunpowder
Master Mind: the Rise and Fall of Fritz Haber, the Nobel Laureate Who
Launched the Age of Chemical Warfare
Saltpeter: the Mother of Gunpowder
The Story of N


Online Sources  (You may need to log in if off campus)


Streaming Videos from Films on Demand