Celebrate Mark Twain's birthday by reading about his life and work.

Library Services has many resources to help you find biographical information about Mark Twain, such as that his real name is Samuel Langhorn Clemens and that he adopted the pen name Mark Twain after being a steamboat captain on the Mississippi. Mark Twain is "a term from his riverboat days that means 'two fathoms deep' or 'safe water'" (Bloom).


You can also dive into the details of his life by reading his autobiography. The most recent is a 2 volume set that Twain insisted not be published for 100 years after his death.

To read literary criticism about Twain’s work, sources like Bloom’s Literature or Literature Criticism Online will have a number of articles about Mark Twain, his characters, and the themes found in his works.


There are many other biography and literary criticism e-Resources, so be sure to visit the Literature and Literary Criticism databases-by-subject page.

If you prefer to celebrate by curling up with some Twain classics, Library Services has many copies of his work in both print and electronic.  Use this Titles by Mark Twain link to view titles available through Library Services.


Posted by Lola Watters at 9:07 AM No comments:

American Indian Histories and Cultures, released September 2013, was developed by Adam Matthew, a London-based database vendor, in collaboration with the Newberry Library in Chicago. 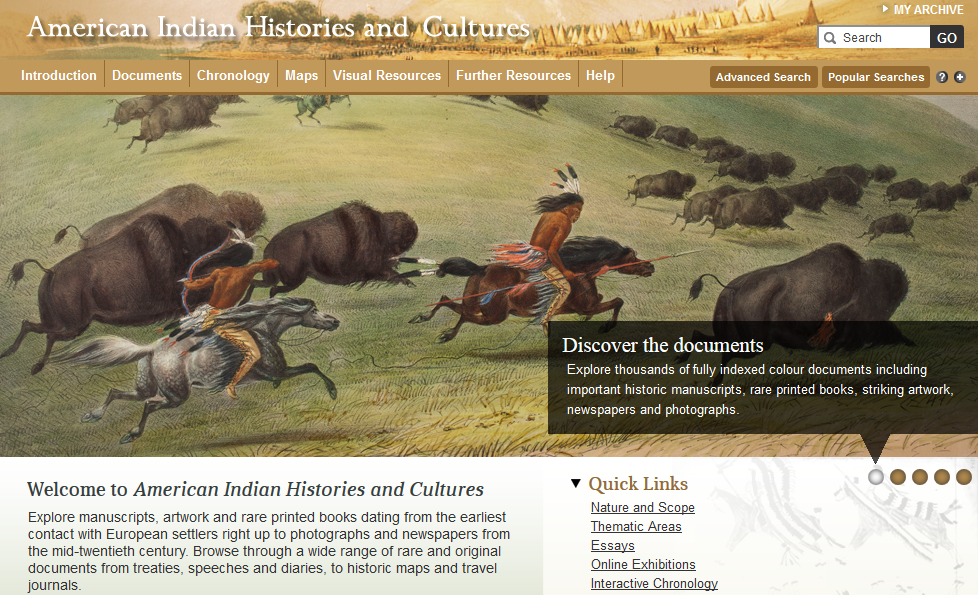 You can find content that spans four centuries, covering American Indian history in the United States, Canada, and Mexico. American Indian Histories and Cultures incorporates visual resources and unique, primary source material from the Newberry's Edward E. Ayer Collection, one of the world's strongest collections on the topic. This database is cross-searchable with the American West database.

You are invited to Take a Tour to experience what this resource has to offer. American Indian Histories and Cultures may be a good choice for assignments in history, government, sociology, art history, and for topics for writing assignments.  Even if you don't have an immediate research need, this database is a great learning tool, an outstanding information source, and a wonderful place to browse.

More than 260 journals are indexed, covering a wide range of subjects--archaeology, gaming, governance, legends, and literacy--in addition to history. Many articles are full text.  You will also find citations for books, essays, conference papers, and government documents of the United States and Canada.

Searching this database for "recommended web sites" on Native American studies retrieved Smith, David A. "Internet Resources for Native American and Canadian Aboriginal Studies." American Indian Culture & Research Journal 32.1 (2008): 103-134. Like other EBSCOhost databases, Bibliography of Native North Americans will format citations for you and you can print, save, or email material you want to use.

In Voices of the American Indian Experience, a 2-volume eBook in the Gale Virtual Reference Library collection, you'll find 224 documents tracing the North American Indian experience from creation stories to 2007. The emphasis is on documents created by American Indians, rather than by Europeans. Documents are arranged chronologically for discovery.
To find a specific subject, you will need to search within the volumes.  Like American Indian Histories and Cultures, this work is a good resource if you need primary sources for your research.

The Gale Virtual Reference Library collection has several other reference works on Native Americans.  An easy way to get to history titles is to click "History" under "Subjects" on the left, or to scroll down the display of books and click the "View All" link with "History."  You can then browse the alphabetical arrangement of books. Other relevant history titles include:

First Encounters:  Native Voices on the Coming of the Europeans

The Indians of Texas:  From Prehistoric to Modern Times

Treaties with American Indians:  An Encyclopedia of Rights, Conflicts, and Sovereignty

You may also want to browse "Literature" and "Multicultural Studies" in the Gale Virtual Reference Library collection.

Finally, visit the Native American Heritage Month Home to see exhibits and collections of material available from the Library of the Congress and other government agencies.
Posted by Teresa Ashley at 2:00 AM No comments: