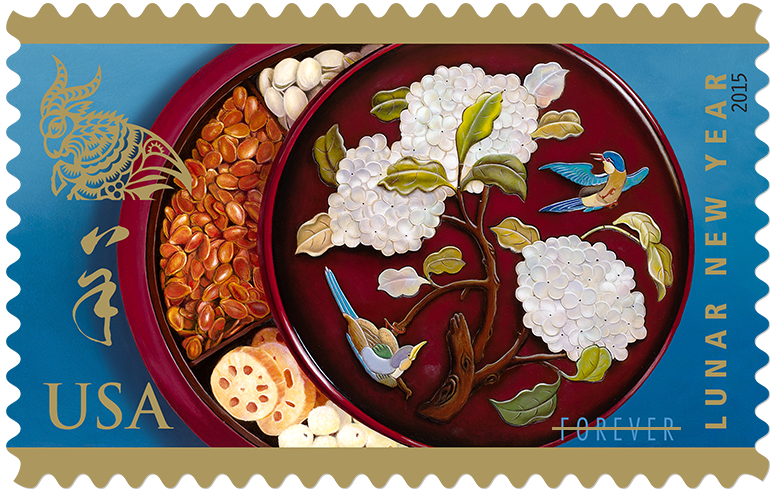 May is Asian-Pacific American Heritage Month

The first 10 days of May were chosen to coincide with two important milestones in Asian/Pacific American history: the arrival of the first Japanese immigrants in the United States, May 7, 1843, and contributions of Chinese workers to the building of the transcontinental railroad, completed May 10, 1869.
In 1992, Congress expanded the observance to a month-long celebration.

The 2015 theme for Asian-Pacific American Heritage Month, chosen by the Federal Asian Pacific American Council (FAPAC), is Many Cultures, One Voice: Promote Equality and Inclusion.

The United States Post Office issued a commemorative stamp for the Year of the Ram, the Lunar New Year beginning February 19, 2015, and "celebrated primarily by people of Chinese, Korean, Vietnamese, Tibetan, and Mongolian heritage."

Asian American History and Culture: An Encyclopedia. E184.A75 A8287 2010 Cypress Creek, Eastview, Northridge, Pinnacle, and Round Rock Campus libraries LIBRARY USE ONLY

Becoming American: The Chinese Experience. Films On Demand. [Streaming video]
Bill Moyers explores the dramatic experience of the Chinese in America, including the murder of Vincent Chin.

Asian Americans in the Twenty-First Century: Oral Histories of First- to Fourth-Generation Americans from China, Japan, India, Korea, the Philippines, Vietnam, and Laos.  E184.A75 A8434 2009 Round Rock Campus Library

Tang, Irwin A., ed. Asian Texans: Our Histories and Our Lives.  F395.A75 A83 2008 Northridge, Pinnacle, Rio Grande, and Riverside campus libraries.
Irwin Tang, adjunct professor of creative writing at Austin Community College, edited a collection of writings on the histories of every Asian ethnic group in Texas. These draw from interviews, archives, articles, and rare photographs.

Hillmer, Paul.  A People's History of the Hmong.  DS509.5.H66 H55 2010 Round Rock Campus Library
Dr. Paul Hillmer is a professor of history at Concordia University, St. Paul, MN. This book was selected for both the Award of Merit and the WOW Award by the American Association of State and Local History. [The book] "succeeds thanks to the breadth and depth of his interview subjects and his fluid interweaving of the personal with the academic." --Chao Xiong, Minneapolis Star Tribune

Chi, Sang, and Emily Moberg Robinson, eds. Voices of the Asian American and Pacific Islander Experience.  E184.A75 V65 2012 ebk Gale Virtual Reference Library
This work presents an extraordinary breadth of contemporary and historical views on Asian America and Pacific Islanders, conveyed through the voices of the men and women who lived these experiences over more than 150 years.

Rangaswamy, Padma.  Namasté America: Indian Immigrants in an American Metropolis.   F548.9.E2 R36 2000 Northridge Campus Library
The focus is East Indians, from all parts of India and all over the world, making their home in Chicago, Illinois.
Kalita, S. Mitra. Suburban Sahibs: Three Immigrant Families and Their Passage from India to America.   F142.M6 K35 2003 Northridge and South Austin campus libraries
Journalist S. Mitra Kalita traces the evolution of the suburb of Edison, New Jersey (named for famous inventor of the light bulb), from a destination for new arrivals to a launching pad for them. She focuses on three waves of immigration through the stories of three families and discusses how immigration has altered the American suburb, and how the suburb, in turn, has altered the immigrant.
Literature
Hongo, Garrett, ed.  The Open Boat: Poems from Asian America.  PS591 .A76 O6 1993 Northridge Campus Library
"Though descended from immigrants from Asia, most of us are American-born, learned English as a native language, went to American schools, and forged identities which had to negotiate the tricky, volatile, and, ultimately, to my mind, *exciting* subjectivized space between race and culture." --Garrett Hongo, p. xix.
Pelaud, Isabelle Thuy.  This Is All I Choose to Tell: History and Hybridity in Vietnamese American Literature.  PS153.V54 P45 2011 Pinnacle Campus Library
The author "probes the complexities of Vietnamese American identity and politics. She provides an analytical introduction to the literature, showing generational differences in genre and text." --Amazon.com

Ask the librarians for other works by or about Asian Americans.

Posted by Teresa Ashley at 2:00 AM