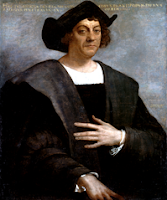 In the United States, Columbus Day is celebrated on the second Monday in October.  This year it will fall on October 14, just two days away from October 12, the day on which Columbus went ashore on the island of San Salvador in 1492 ("Columbus Day" 118-119).  Saying that Christopher Columbus's discovery of the Americas (or rediscovery, considering the earlier Viking settlement in Newfoundland ("The Vikings")) brought many changes to the world is, if anything, an understatement.  Historians even have a term for the Americas before Columbus, "Pre-Columbian."

Historian Alfred Crosby noted many of the changes as a result of Columbus's voyage to the new world in his book The Columbian Exchange: Biological and Cultural Consequences of 1492, from which we get the term "Columbian exchange."  Once revered, Columbus is now seen more critically by some for the many evils that Europeans brought to Native Americans after his discovery.  Whether or not Columbus himself should be blamed for these evils is up for debate ("Who Owns History").

At any rate, the Columbian exchange did bring many benefits, such as new foods.  Indeed, where would fast food be today without the potato and tomato from the Americas--the basic ingredients for French fries and ketchup (Crosby 170)?  But in all seriousness, crops such as the potato have had enormous consequences for both European and United States history.

Food, in fact, played an important role in Columbus's voyage.  Europe relished spices from the East.  However, with the collapse of the Mongol empire and the Ottoman capture of Constantinople in 1453, trade over land between Europe and the East became much more tenuous (Phillips, Jr. and Phillips 47, 49-51).  This helped motivate Europeans to find sea routes to India and the Orient--to Marco Polo's islands of spices and gold (Hale 59).  The Portuguese sailed around Africa to get to India.  Columbus proposed sailing westward to reach the East ("Discovery of a New World").

Why would anyone back Columbus's venture?  Wouldn't they worry that he would fall off the edge of the world?  Actually, contrary to popular legend, contemporaries of Columbus were quite confident that the world was "round," not flat.  Indeed, in his book Inventing the Flat Earth, historian Jeffrey Burton Russell refers to this recent myth, which once inhabited many textbooks, as "The Flat Error" (Russell 1-4).

Nevertheless, long ocean voyages could be quite perilous.  Despite Columbus's underestimate of the earth's size, his expedition still promised to be lengthy.  At that time, mariners did not have a reliable way of determining their longitude, and even latitude could be difficult to discern.  Thus Columbus's sailors were justified in their fear that they might become lost at sea, that their ship might be destroyed in a storm, or even that they would run out of fresh water before reaching land (Morison 184, 191).  So, although falling off the edge of the earth was not a concern, Columbus's voyage could still be considered a quite courageous undertaking.

As we can see, a study of Christopher Columbus is multifaceted, which illustrates one of the many values of ACC's libraries:  they provide resources for studying many aspects of a particular subject, not just one--in this case, historiography, astronomy and navigation, and geography, just to name a few.  Here, then, are some of the many resources that ACC's libraries have about Christopher Columbus and related topics:


Circulating Materials (May Check Out)

Admiral of the Ocean Sea
Age of Exploration
Celestial Navigation
Christopher Columbus: Explorer of the New World (DVD)
The Columbian Exchange
Inventing the Flat Earth
Longitude
People and the Sky: Our Ancestors and the Cosmos
The Worlds of Christopher Columbus
When Worlds Collide: The Untold Story of the Americas After Columbus (DVD)


Online Sources  (You may need to log in if off campus)

Streaming Videos from Films on Demand

1421: The Year China Discovered America?
Discovery of a New World
Latitude and Longitude: A Global Address
The Vikings
Who Owns History?
Wind

"Columbus Day." Holidays, Festivals, and Celebrations of the World Dictionary.